Like This TopicFollow This Topic
moptopMember
Hi I have just been told that, following 2nd occurence of metastasis in my right lung, I will have surgery on 7th March and the expectation is that removal of only the lower lobe will be inadequate and they are expecting to remove the whole lung, providing prior tests show my able to support it (and I'm very healthy otherwise, so... yeah).

My previous intervention in the lung was through keyhole surgery, they removed only a small section between the upper and lower lobes of the right lung - and did not remove the lymph glands (which is where the metastasis is showing now).

Has anyone here had partial (but major) or total lung ablation, and can you tell me about recovery and pain levels to expect? My last one was keyhole surgery, and it was still was months before I could wear a bra again, for example!! (OK, guys, I realise that this is not necessarily an issue you may have noticed...)

I still don't understand why they didn't 'scrub' the lymph glands last time (which is what they said they would do). If they had, I really feel I would not be in this situation now. I adore my ENT surgeon and radiotherapist, but I was not impressed by my thoracic surgeon, and in fact I have never had any follow up from that department; I'm honestly considering taking action agains the surgeon, who never even visited me after the operation.

Well, that's a bit by the by and I don't expect I'll have the energy to face anything like that.

OK going to go before I get too down.
Take Action
Original Post
moptopMember
Hi! I thought I'd give an update.

So, I had a different surgeon this time. Maybe I was suffering post-shock and depressive temper, maybe judging thoracic cancer is just hard. I'm still not terribly reassured by them, but, right now I'm doing really well.

So, pre-op, the expectation was that they would remove the lower and middle right hand lobes. The surgeon advised that they believed it was a new primary, rather than repeat metastases, since it is very unusual to get metastases in the same place. As such, they would also remove the lymph glands (which they don't do for metastases).

What in fact happened was that they removed the top lobe and left the other two. He said (and at least I did get post-op visit!) that once they'd opened me up, they found it was growing upwards mostly, which was not visible on the scans; but they 'cut broad', to take out the lower part of the growth as well - well, they hope so. Frankly I didn't feel terribly encouraged.

In fact, after I'd been here for a week or so, the surgeon called (actually his secretary called, but I didn't understand what she was telling me, so she had to put me through to the surgeon); and explained that it didn't look like a new primary after all, but indeed metastases. Probably because they were not properly managed last time, which is why they are in the same place - I still think I was right to feel uncomfortable about the work done. But, it means that I will be referred back to my gorgeous ENT surgeon again for follow up, so that is good!

Really hoping there is no need for further treatment, although radiotherapy is a possibility.

Since this was third prob. since 2009, I felt I need some support recovering, emotionally as well as physically, and asked to be sent to a specialist clinic for recuperation/re-education afterwards. These are 'Cliniques du souffle' - 'Breath clinics' - and they treat all types of chronic breathing problems. Most people are here with long-term breathing problems like bronchitis (smoking), emphysema (smoking), etc; but there are also a lot of people with serious heart conditions (which can also be caused by smoking, of course). There are a few who, like me, have had lung surgery for cancer.

This is a great place - and definitely not a 'convalescent' home in the traditional sense of sitting around with blankets on your knees!! No, it is more like a boot camp. They put you through some tests to judge your capacity,(I tell you, the 'effort test', where they push you to your maximum on a bike, wired up to heart monitors etc., and taking arterial blood tests for oxygen levels - one of the hardest things I've done in my life. I almost passed out). and put you in a group with a similar level. You are then put on a fitness/physical activity and therapeutic teaching program.

I am so lucky that the group I am in is made up of positive, fun people! We all encourage each other, and there are definitely times when we need it. My first day of activities (a Monday), which was 10 days after my operation I had tests in the morning, but afternoon was an hour's 'topographic' walking, with about an hour's break, then muscle-building gym. The topographic walking is where they teach us how to manage breathlessness and breathing when going uphill. The clinic is set in a lovely park, and is conveniently placed on some gentle hills.

They really are gentle hills, but they almost destroyed me that day! The first one we did was quite long but shallow, ending in a steeper bit; most people did it at least twice, but I could only manage the once. Then we did another one, which was shorter but steeper. Remembering our breathing techniques, counting, iiiiiin through the nose, ouuuuuut through the mouth, longer breathing out than in... I was just happy to stop!! They constantly take your oxygen levels and pulse, and my first was low (under 90%, don't recall exactly), my second was high. I don't think my pulse went under 120 for the first 2 weeks after the op. They have put me on pills to manage it for the moment, I'm hoping I will not have to continue them for life; we shall see.

Anyway - it is a regular weekly program. This Monday in the same walking activity, I did the first hill 3 times, and the second one twice; urged to try to do it a little faster (they push you, carefully but constantly). I didn't do the second one faster, but nor did I want to fall over when I'd finished! So there is real, obvious improvement, which makes one feel so good.

I have also been seeing a psychologist (in France it is psychologists who treat patients through therapy rather than medication); she has been a great help, as I was extremely depressed when I first arrived.

And a physio, who has been working on my - um - can't remember the term - maximum capacity to breath in. Because my breathing texts showed that I was only at 65% capacity, although that test is the capacity in one sharp intake. The work with the physio is capacity over a long, regular(ish!) intake. The norm for someone my size and age is 2150 ml 'inspired volume' - sometimes I reach 2250.

Other activities include exercise bike, 40 mins, of which 30 at optimum aerobic pulse rate at 25km/hour; a fun but still useful session of 'adapted activities' where we faff at badminton, football and other sort of actions, whilst breathing correctly; suppleness and balance sessions; and learning, about the ventilatory system, about managing stress and depression, and about specific subjects that may or may not be relevant for you - you pick and choose. Oh, and three different types of walking activity - the topographic one, another one that is an hour's walking on the flat but maintaining optimum aerobic heart rate; and one that is out of the grounds, cross-country, taking us up hill and down dale a bit. Wet feet and gasping!!

So, well, a very, very positive experience, which I am very pleased to be experiencing. As for the possibilities and situation when I leave (another 10 days to do) - I'm not thinking about that yet!

There, long and detailed and I think a wee bit different

Like Reply (0 Likes)
Take Action
haggMember
Hi Moptop, wow, that was long and detailed. I had a psychologist too. She sorted me right out and I'll always be grateful to her. I think France has the right idea using them. A brilliant stratagey.
Exercise is a good but under valued way of dealing with depression too. It can be difficult to motivate yourself to actually do it when you are in a deep depression but it certainly helps.
Hagg.
Like Reply (0 Likes)
Take Action
moptopMember
Well - I just thought I'd check in and let you know I'm well and pretty fit. Not at 100% of my old fitness, but I walked up the mountain behind my parents' house the other week, the hard side - ok it's not a very big mountain, but it's considerably more than a hill - doing that had been a challenge I had been saving up for myself, and I was so proud of myself when I got to the top!! I was too tired to walk all the over - the walk the other side is less rough but longer - so I roughed it back down again; and I was completely exhausted - but alive and I'd made it!

Here is the view from up top... it's quite a long way up, really! (not at all sure if this will work, but might as well try it) 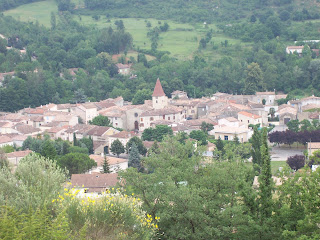 We're sorry. You must be signed in to continue. Sign In or Register
×

Are you sure you want to remove from your Block List?
×

When you block a person, they can no longer invite you to a private message or post to your profile wall. Replies and comments they make will be collapsed/hidden by default. Finally, you'll never receive email notifications about content they create or likes they designate for your content.
Note: if you proceed, you will no longer be following .
×
Loading...